Dune 2000: Rise Of The Mercenaries 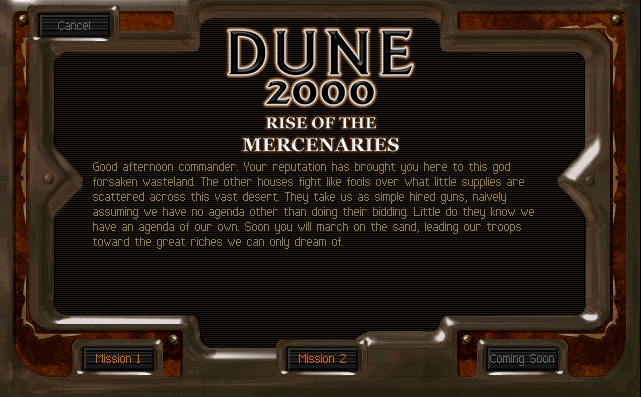 Dune 2000: Rise of the Mercenaries

Rise of the Mercenaries is a thrilling campaign designed to expand on the campaign designed by Westwood Studios, allowing to players to play as the powerful hired guns known as the Mercenaries. Adding 3 new missions to the game, the expansion places you in the shoes of a Mercenary commander, in charge of an important mission to break free of your servitude to the other houses and lay claim to the vast riches present on the planet. Featuring entirely new menus and maps, Rise of the Mercenaries finally gives Dune players the expansion they wanted and deserve.
Currently, the expansion is available as a demo, allowing the 1st and 2nd mission of the campaign to be played. The rest of the expansion will be available upon completion.

To obtain the  demo, simply download and install Dune 2000: Gruntmods Edition. The expansion will eventually be available as a stand-alone download some time after the completed product is added to the GruntMods Edition.